but just now
as Husband was helping her into her unicorn & rainbow pajama pants,
she suddenly spun around, declaring,
"I'm going to kiss you, Mommy!"

And she did,
leaning over to me with little arms outstretched:
"Mm-muh!"

And then
wrapping those wriggly arms around my head,
big blue eyes staring into mine,
she started running her spindly fingers through my hair.

"I like your hair, Mommy!"
Tiny fingers winding, weaving, and smoothing my frizzy flyaways.
"Your hair is nice!
"Your ponytail is soft, comfy, and sweet!"

Those deep blue pools again:
"I love you! I really love you!"

And now
that's all my heart
and brain
contain.

So you'll have to be content with just a picture
of the little blonde girl who loved a dancing Chinese lion yesterday. 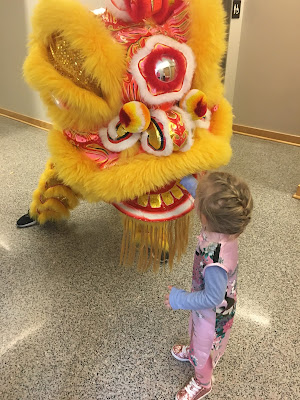 What did you just think of when you heard that word? Sluggishness? Reluctance? Trying to shake yourself out of a fog? Yeah, me too. Until I get to class.

Mondays in my classes, more than any other day, run like a well-oiled machine. Smooth, simple, with gears turning purposefully. Going somewhere.

Every Monday, our warm-up is the "idiom of the week". Idioms are everywhere (Seriously. Have you noticed? Tomorrow, pay attention to all the idiomatic phrases you hear and read, and then imagine not having grown up with them!), they're hard to figure out if you don't just know them, and they can be pretty silly and fun! (Today's was "to sling mud", and an astute student pointed out that it's a lot like "throwing shade" -- they might not know traditional idioms, but ELLs sure don't struggle to pick up slang!) It's a light, non-threatening way to start the week... and I always smile to see one of our past idioms find its way into a student's writing months later!

Every Monday, we also check in about our academic goals. For the past several years, we've used the WOOP framework to set a goal that we want to work on for about a month. Teaching students to proactively realize what obstacles are standing in their way and plan how to overcome those obstacles has been incredibly powerful. Now that we're also using R-factor concepts, the language of default actions vs. disciplined actions has fit in perfectly with this structure.
I used to have students share their progress with a partner, but now that I've shifted my class to a "squad" unit format (posts on that coming soon, I promise!), they share with their whole squads, and the conversations are much more powerful. These check-ins only take a few minutes, but their impact is incredible. Students are leaning forward, nodding, reflecting, and encouraging each other as they honestly share about why they are struggling to meet their goals or how they were successful. 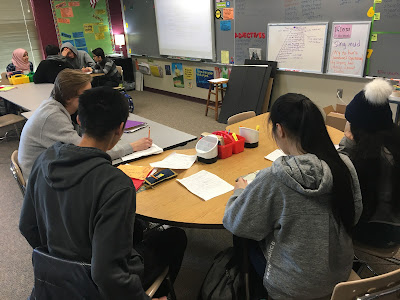 And every Monday, we time ourselves reading for exactly 15 minutes, noting our starting and ending page numbers. When the timer goes off, we enter those pages into our reading goals spreadsheets (template 1 / template 2) to set our page goals for the week (based on Penny Kittle's idea from Book Love) and do a little thinking about our reading. I do my own as a model, and it's fascinating to see how my reading speed changes between and even within books and how much more purposeful I am about my reading when I know I have a specific goal.

Fingers fly on clicking keys and flip gently through book pages in a settled, nearly-silent hum: purposeful, thoughtful, spinning the foundation for a new week of reading. I could sneak out of the classroom and I'm pretty sure almost everyone would just keep typing. On Thursday, we'll check back in to see what progress we've made, but for now, the invitation to push ourselves forward as readers stands open.

Too much routine can be boring, but on Mondays, our routines anchor us and drive us, using reflection, goals, and community to focus on what matters most: reaching toward our best selves, one week at a time.
Posted by JenniferM at 9:29 PM 2 comments:

Head up. Shoulders back. I check my reflection in the tinted windows. Do I look like a runner? Come on, legs! Don't slow down.... Oh gosh. This is hard. Just keep going. Ok.... 1 lap. Focus on this 1 lap. Then another. 1 at a time... Head up. Breathe. Don't let form break down. Another window-reflection-check. Go, legs!... Oh gosh, look at that guy. He's like, a real runner. How many laps is he doing? I wish I could run like that... Last year, I was running a mile in under 9 minutes. When can I run a mile again? People must think I'm so out of shape, running these little bursts of laps with breaks, and my dumb fat belly... Nope. Stop. Look how strong I'm getting! I'm getting so much stronger!... Here we go. Eyes ahead. Head up. Come on.

Then, the sweet-settling cooldown walk: That was hard. Good-hard. Look at me. Sweat-pouring stretches and cool-gulping mouthfuls of water: Yep, just the right kind of good-hard for now. Bounding down the stairs: Way better than sitting at home. Adjusting the seat and pinning the right weight into place: I'm going to get there. Just keep pushing. Furrowed brows, steady weights swinging: Just keep going. Just a little more. Better every day.

"Are you a trained runner?" This gray-haired man's admiring tone jerks my brain out of its workout-sharp, so-clear-it's-almost-empty focus-void.

"Umm?" My eyes briefly dart around to see if he's talking to someone else. "No? Not really?" I ran middle-school track for two years, very slowly, awkwardly, and poorly? I have never excelled at anything athletic in my life, except marching band? I'm just a band girl?

Clearly, my stammering, startled confusion takes him aback. "I'm not trying to be smart or anything, really! I was just watching how smooth you were running, and I thought, 'Wow, she has to be a trained runner!' You're one of the smoothest runners I've seen around here!"

"Oh! Wow! Um, thanks! I mean, my dad was a runner, and I kind of learned from him. I've been trying really hard! Thank you!"

And just like that, the remaining tendrils of doubt and discouragement release their hold on me. He noticed me, and thought I was doing a good job? He noticed so much that he had to come up and say something, when he doesn't even know me at all? He thinks I'm a real runner?! I feel like I just found out that I'm actually a superhero!

I guess I could have told him that I was in the OSU Marching Band for 5 years, and that helped me develop an acute awareness of my posture and movements, coupled with the determination to relentlessly analyze my performance and find ways to improve. I could have told him that the R-Factor conversations my favorite new colleague has brought to our school have reinforced that old drive and analysis while also challenging me to examine my focus and self-talk to develop a more positive growth mindset.

I could have also told him that I only started running seriously a year and a half ago, and that since then I've had to stop completely and start over, twice, due to the hardest personal tragedies I have ever gone through, within less than a year. I could have told him that the past three years have been the most challenging of my life, for way too many different reasons, and that even though the simple difficulty of running gives me power and clarity, I'm also tempted to quit almost every week.

"Runner?" Not if you mean a competitive athlete who's been running for years, which is what I'm tempted to think it means. Runner, as in a person who runs, just like a writer is a person who writes? Yeah, but it takes some work to make myself believe it.

But I didn't tell him any of that. I just smiled and savored his words all evening. And three days later, when I ran again. And every time I've run, over the past three weeks, ever since. I run, and now my brain says: Smooth! I look like a trained runner! Eyes ahead. Head up. Strong legs. Keep it up, Smooth Runner.

Identity is powerful. Feedback is powerful. Specific, timely feedback that builds an identity is life-changing. And when it's a surprise, it goes straight to your heart with even more force.

How much better would our classrooms, our schools, our world be if we all acted a little more like random rec center guy? If we slowed down enough to notice each other? To figure out what's special and point it out? To honor what someone else is striving for by naming it? Let's search for opportunities to say, "Hey, I noticed your hard work. It was awesome because (specific observation). It made you look like a real (identity construct)."

This is what we all need to RISE.