"I feel bad because no school. I feel boring in the home. I miss my teachers and friends at the school. And I feel a little scary because I don't want sick." K. tugs at her hijab as the rest of the circle nods.

"I feel good because I want to sleep in!" L laughs, as she often does in circle. "But I'm scared for my mom and dad." She switches to Spanish. My dad is all alone in Venezuela, and they don't have the tests there. And nobody in our family is with him."

Our circle gets quieter, that kind of deep, serious quiet that happens when people know they are connected through their inner feelings.

"But Miss Mitchell, what IS a virus? Where did this come from?" T. is in biology right now, but before he came here, he only had a couple of years of off-and-on schooling in rural Guatemala, as did several others in this class.

I feel inadequate trying to explain, especially as I try to echo myself in my second language. "Umm, it's some germs that can be passed between people, and they attack our bodies and make us sick..."

"In Guatemala, there are no tests and no money for medicine," T. looks down. "And they won't want people coming in, so I can't go back." I know he's worried about the little siblings he sends money to.

"I work at the front of my restaurant, and I'm scared! I talk to customers, clean the tables, and clean the dishes." Y. shakes his head. "I'm washing my hands all the time, but... what if someone comes in who has the virus?!"

"What about the people who work in stores?" I., brand new from Guatemala just two days ago, doesn't seem to be afraid of speaking up in his very first circle. "If the stores close, how will they get money? And how will people get what they need?"

"We went to the store this week, and everything was gone." L. jumps back in, even though it's not her turn, and that's ok, today. Anything is ok, today. "It reminded me of Venezuela. It wasn't a sickness, but when the economic crisis came, everybody bought everything, and nothing was left. It was just like this."

"It's not like America," B. jumps in. "That doesn't happen in America."

"My brother sells food, and the other night he was selling food, and a Chinese guy was too." Y.  has more to say. "They were both washing their hands between every batch and using gloves, but when they got to where they were taking the food, the owner threw everything from the Chinese guy right in the trash. Like a thousand dollars, right in the trash."

Around the circle. In English and Spanish.

I make sure everyone has said everything they want to say and close the circle. They head back to their seats, and I remind them how we'll connect over the next 3 weeks (although, in my head, I know it will probably be longer). I give them some time to explore the extra practice links I've provided and make sure everyone is set up for the tools we'll definitely be using.

I remind them that E+R=O, and talk about how this is one of those big events we can't control, but we can choose responses that will help us get the outcomes we want. I remind them how hard they've worked to learn English this year, how they all said that was one of their most important outcomes, how they don't want to lose the progress they've made. I bribe them with prizes when we return and finally see a few smiles, because I know that as hard as we might try to inspire ourselves by thinking of the outcomes we want, sometimes we all need a little extra boost.

I remind them that our school is working on a way to still provide food for students during these weeks, and tell them to message me if they need anything else, because there's an organization in our community that works to help families get what they need.

Our precious minutes are winding down, and their big eyes are looking at me like they don't want to walk out of our room. A Muslim girl from Kurdistan and a Catholic girl from Venezuela are holding hands, whispering how much they'll miss each other. They're scared and sad.

One of my toughest boys has walked out of class (and back in, of course) at least three times, and he keeps saying he's not coming back to school next year. The other is sprawled on the beanbag pillow, complaining that he's hungry and bragging about how he's not going to do any work over the break. They're scared and sad too.

Mostly, the girls give me tighter hugs than usual, and the boys opt for fist bumps. But Y., in line behind a girl, holds out his arms. I remember him trying to use the word "elect" in a sentence earlier this year, and writing "I elect Mrs. M to be my teacher next year." I remember overhearing him two days ago as he told our new student "Mrs. Mitchell is buena onda." I hug him, and his face blooms into his biggest grin. "I was scared," he laughs.

Email ThisBlogThis!Share to TwitterShare to FacebookShare to Pinterest
Labels: ELL, R-factor, relationships, slice of life, sol20, Why I Teach

"Taking care of you makes me happy too!" As Daniel Tiger's voice bursts happily out of the book, RainbowGirl tilts her head up to beam me a half-toothy baby smile. She sways her whole upper body side-to-side in her patented dance move. As soon as the tune stops, she smashes her pudgy thumb down on the button again, grinning at Daniel in the book this time. Again. Smile. Again. Giggle-smile. Again! Again! Again!

For a change of pace, she pokes out her tiny pointer finger to push the picture of Daniel on the bottom of the page, which is supposed to signal that the reader should push the button. Nothing happens, of course, since it's just a picture of the button. Big eyes stare up at me.

"That's just a picture! Good experiment, though!" I love watching her figure out the world.

She quickly finds the real button again and happily smashes it, beaming when it plays. "Taking care of you makes me happy too!"

As she "dances" to at least twenty iterations of the one-line song, Sweetie runs into the room and flops down beside her. "Taking care of you makes me happy too," she sings sweetly, wrapping her arm around her baby sister and gazing at her with a proud big-sis grin. 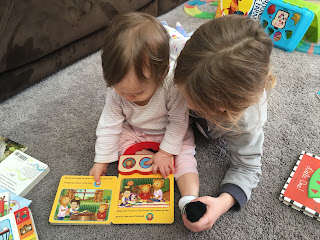 They snuggle-read for several minutes, baby sister dancing and big sister singing. The next time RainbowGirl tries to push a picture instead of the real button, Sweetie interjects by sweetly speaking the words of the song: "Taking care of you makes me happy, baby!" She plants a big kiss on her little sister's cheek just as that little thumb finds the real button again to start the cycle over.

"Taking care of you makes me happy too!"

My heart is ready to float up out of my body, because it's true.
Posted by JenniferM at 4:55 PM 4 comments: