As the bus pulled into the parking lot, we could see a gathering of dark uniforms on a hill in the distance.  "You can take pictures of anything except funerals that are going on now," the guide reminded us over the bus microphone.

Wow.  Suddenly I had a lump in my throat and I had to blink my eyes a lot.  (Nobody look at me, please.)  There is a funeral going on right over there.  A young soldier who gave everything off in some desert on the other side of the world?  Or it could be a surly but sweet old Marine who, like my grandfathers, signed up to save the world 60 years ago.  It could even be someone long-lost but suddenly found, like my great-uncle who's buried right here, somewhere.  His plane went down over Europe and they never found him until a lake got drained decades later.  It was such a shock at that point that his wife, who had re-married, didn't even make the trip here for the funeral.  Can you imagine? 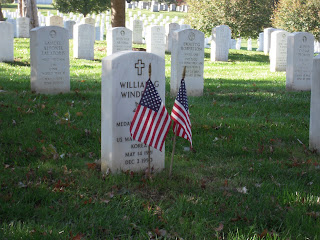 We step out the doors of the visitor center and the sight of all those white spots laid carefully over the rolling green hills takes my breath away, even though I've been here before.  My eyes are drawn to them so that I can hardly focus on counting kids to be sure everyone's still with us.  So many white markers, and they go on forever as we walk.  Another hill crest, another endless stretch of white on green.  And this is only the ones who wanted to be buried here.  Countless more across this nation, and thousands more overseas.  That poem I had to memorize in 7th grade pops into my head, as it always does in such places.  "In Flanders Fields, the poppies blow / between the crosses row on row / that mark our place, and in the sky / the larks, still bravely singing, fly / scarce heard amid the guns below..." 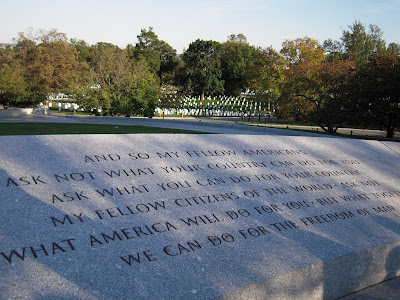 Posted by JenniferM at 6:16 PM

Email ThisBlogThis!Share to TwitterShare to FacebookShare to Pinterest
Labels: slice of life