Recognizing the gift of words

A few days ago, when my students walked into class, they were greeted by a bouncing me chirping that I had a surprise for them.  On the screen, they found a selection of quotations about writing and stories to contemplate: 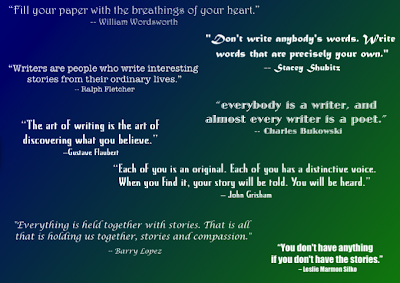 Next, I invited students to think even more about the power of words:
I shared two examples:


Next, students got a few minutes to sketch or brainstorm their own special memories, and then we came back together to share as a class.  Some highlights (and remember, I teach high schoolers!) were:
Those brief, courageous moments of sharing certainly brought our community closer, and then it was time to reveal my surprise!  I reminded them that I went to a writing camp this summer, and then began to show pictures of a special day at the CAWP retreat: the day Kevin brought StoryBoxes to share!

You can probably guess the surprise now, but there's more to share, and this post is already too long... Guess you'll have to read more tomorrow!

Posted by JenniferM at 9:07 PM