"EHHH! I want THOSE elephants!!!" We're watching one large elephant use her trunk to try to get some grasses from a hanging basket, but Rainbow Girl starts pointing wildly over my shoulder at the five elephants we just left. After protesting her new-first visit to the zoo for most of the morning, then warming up to the general idea of walking around and seeing everything, this is the most enthusiasm she's shown for any particular animal.

"You want to go see that family of elephants again?" I grin, giggling a little. We'd moved on from that particular spot along the fence to give other people a turn (and to avoid people who insist on wearing their masks as mouth-only covers or (worse) chinstraps), but we can definitely take another turn if she's this excited about them. So far, she's mostly just enjoyed taking in all the surroundings, and I'm not sure she's really been able to pick out some of the calmer, smaller animals in their habitat or grasp what we're doing here.

"Yes! Yes! Yes! See THOSE elephants!" She wiggles back and forth against my hip, one little hand clutching my shoulder while the other one continues to point at what is apparently the correct group of elephants for us to watch.

"I have elephant diapers!" she declares to no one in particular... or possibly to the elephants. She points at the male elephants' tusks. "That?"
"Those are their tusks! Like big teeth!" I realize that I'm not sure any of the elephants she's seen in books, on her diapers, or in the elephant song have tusks. A friendly docent tells us that only the males have visible tusks, but the females actually have short ones that we can't see, just a couple inches long.

Finally, I ask again her again if we can let some other people have a turn and go see some other animals, and she doesn't protest this time. "Can I run?!"

There's a wide path and not too many people here, so I put her down and get ready to push the empty stroller. She and Sweetie skip-run-frolic behind and then ahead of me until we get to the red pandas, who are actually exploring their habitat instead of sleeping.

"That?! What's that?" she flails over to the fence.

"They're so cute!" her big sister exclaims.

By the time we get around to the other side of the zoo, she really seems to be catching the excitement of seeing all these different kinds of real animals. We see several penguins dive into the water just like in the video from their Ranger Rick magazine that she keeps requesting we watch over and over. 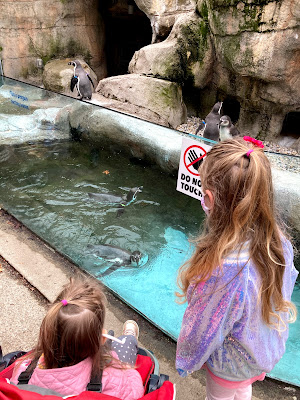 She flops her head against mine when we see the baby koala snuggling on its mommy's lap, putting one bent arm in front of her face and wiggling her bottom like she does when she snuggles. "Mmmmmm! They're snuggling!"

We all giggle at a family of siamangs swinging from their ropes and perches: "They're swinging!" We watch a beautiful leopard stalk around its habitat. "It go away!" she announces when it heads off for the other side of its enclosure.

It's so much fun to see her (re)discovering how amazing our zoo is. I've missed this so much, and so has Sweetie, who's been alternating between exclaiming "I remember this! I've had a picture in my mind!" and "I don't remember where the things are anymore," throughout the several hours we've now been here. Before Rainbow Girl was born, we came several times a week during summers and school breaks and after school, eating lunch and getting snacks, playing on the playgrounds, enjoying how different the animals behave each time, and singing Raffi's "Going to the Zoo". And just when Rainbow would've really started to understand and enjoy it, it became, instead, another missed experience in a year of too many blank calendar squares.

But now, we get to enjoy watching her see it all for another first time. And that's beautiful too, just like our time at home together has been.

Unfortunately, we encountered people with enough disregard for the mask policy and social distancing that I'm hesitant to go back anytime soon because it might be even harder to stay away from them if the crowds get any bigger... but if we have to wait a long time again, we can just enjoy another first time.

(My mom and I always sung this song on the way to our many trips to the zoo together, then I sung it to Husband every time I dragged him there when we were first married, then I sung it to Sweetie, and now I can sing it to two sweet sisters!)

Posted by JenniferM at 5:13 PM